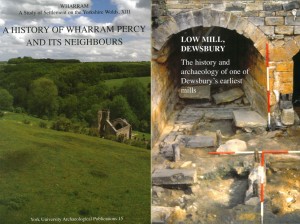 Stuart was both editor and principal contributor to the final volume in the Wharram series, published in 2012. It was acclaimed by Professor David Austin, in his review in the journal Medieval Archaeology, as ‘a triumph’, a ‘superbly illustrated and presented volume… stuffed full of very fine scholarship and innovation’, and demonstrating ‘masterful control of a huge amount of data’.

His publications for wider audiences include a guide book to Kirkstall Abbey’s medieval guesthouse which influenced the design of and approach to subsequent guides to medieval abbeys, and an award winning booklet on Low Mill, Dewsbury, a medieval and later mill where the story of its structural remains could be integrated with extensive documentary sources and a range of historic maps.